Our Stories: Panther Express (an experimental work based on site, memory, and bodily interactions)

Graphic Elements of the Project:
See Video and Description Below 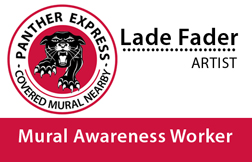 Description
Our Stories is an activist performative / digital project that harnesses the power of place/site, memory, improvisation and story to address issues concerning race, bias, and power on a university campus. The project was conceived and directed by myself. The project also involved the participation of undergraduate student-activist, Arami Walker, as she shares her spoken word performance. In an interview, Arami also shares her reflections on her experience of race, gender, identity and the erased histories at two campus sites, the Ackerman food court and the Jan Steps at UCLA.

In this project, my interest was in raising awareness about a site of memory on campus. The site is the Ackerman Food Court. Adjacent to the Panda Express fast food area there is a wall. For over 20 years, under that wall, there existed a mural (titled ‘The Black Experience’) that was painted by African American students from the art department in 1970. The University covered the mural with a false wall (literally) for all those years and with the work of student groups, faculty, and other forms of activism, the false wall was removed and a restoration of the mural was undertaken by a specialist from the Getty Center.

Relating with this site of erased memory, the voices of the unheard and the social and political tensions of the site was important to me. With my work as a choreographer and visual artist, I decided to create an artistic intervention at these sites involving performance, graphic design, and creating an alternate identity for myself. I was also studying with Chicana muralist Judy Baca and was exploring the use of technology and arts artivism or artivism.

Hardly anyone who passed by the mural, while getting their food in the food court, was aware of the significance and/or history of the mural. I wanted to address that in an subversive, interdisciplinary and choreographic manner.

I created an identity for myself and dressed like one of the Panda Express workers. I also used my graphic design skills to conceptually hijack the Panda Express corporate logo and morphed it into ‘Panther Express’. I created a name tag to appear more ‘official’, and also created a flyer with information about the mural with a QR code that could be read by smartphones to learn more about the mural and related issues and stories. The shift in branding was meant to address the tensions and activism of students at UCLA during the late 60s and early 70s. I stood with a tray of small animal figurines as a way to engage with people who walked by and also workers from the food court. Unfortunately, the video does not show how I asked the people I engaged with to join me in some pedestrian / improvisational movement while we spoke. We did brief pedestrian-based improvisations together as we talked about the mural!

This was an experimental project in which my aim was to be an ally for those on campus (historically and currently) who contend with injustice on a variety of levels. I sought to give voice to the unheard stories of persons and groups on campus that experience racism. I am passionate work more with socially and emotionally vulnerable people in our society. I believe the visual and performing arts can be deeply healing and restorative and I want to keep aligning with this vision.

I invited Arami Walker to work with me to raise awareness about the mural and she shared her perspectives as a biracial woman on campus. She also performed her spoken word piece concerning the mural and also another site on campus. The Jan Steps is a major landmark on the UCLA campus. It is also the site of a speech that Dr. Martin Luther King, Jr. delivered. There is a miniscule commemorative plaque to the side of the steps. Most campus tour guides never mention the significant historical fact of Dr. King’ delivering a speech there.

With this project I was using my awareness of the hidden histories of two sites on campus and to direct attention and awareness about these sites with a transmedia approach.